The finished turning, It will get a flange welded to it for mounting.

The adapter as it looks on the turbo

Posted by Unknown at 3:41 PM No comments:

Your Car Is Worse. Trust Me. 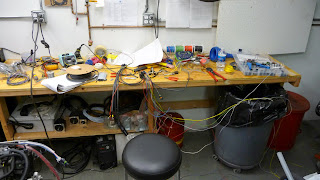 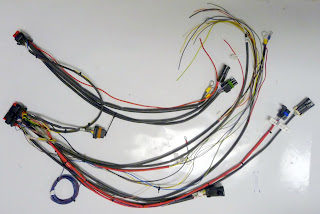 This is what 40+hours of wiring harness building nets you. Continuity is good,and until the ECU gets here there isn't much else I can do on this. I just hope that I got all the pin outs right and that things that need the reference voltage and those that get power are all correct. Nothing more fun than debugging a multi variable system. Especially one with this may variables. At this point I have to wonder about all the things I haven't been able to check. Fuel pump, injectors, compression in all the cylinders, oil pump, you get the picture. 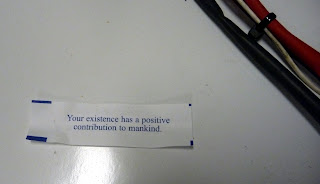 From Tonight's Chinese food. Karma is behind us 110%.

If This Actually Works The First time.... 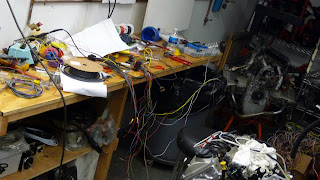 36 hours in and almost done. A Lot of that time was spent trying not to engineer myself into a corner. I do think I managed to over engineer the entire thing by twice the effort I should have put into it, but when it comes to the development stage, I hope it will pay off. In this image, beside the Mess on the bench, you may have noticed a lost BMW R bike engine and drive train, as well as the stepper motors and controller for another project I swore I'd have done by the end of this year. Donut ask me how that's going. In planning my own demise I am now confident that it will be under the crushing force of the avalanche of all the unfinished projects that will have reached critical mass around my 90Th birthday. Thus securing my legend for posterity. Right?

There's Something Zen About Wiring

I for some reason find wiring or working with electronics calming. The problem is that around here I don't seem to get to concentrate on something like this for very long, so of course this has taken far longer than it should have. Here’s the current state. The main 34 pin Amphi connector is about 2/3 populated. The smaller 21 pin is almost done and then all I have to do is tie all these back to their sensors which are all connected my Metripak connectors so that should be fairly quick. Some of the time its taking is determining what gauge wire to use and that’s partially based on what colors I have available. I dismembered some of the smart car harness to get a good selection of colored wire. Since only solid color wire is easily available new chopping up and existing harness is a good way to get wire with unique color combination. A must to keep everything organized, in even a simple harness like this with about 45 to 50 wires. Gauging is another story but so far I've been lucky with the selection I have. Word of advice; when you are building a connector with 34 pins, start from the middle and work your way out to the peripheral positions. If you try to build it by starting at number 1 then you will be fighting to keep it organized and to insert new pins/wires once you get the first row done. FWIW. I don’t need all this to get the motor running. However, I will want some of these sensors for tuning and still a few more will be part of the data logging to see how the motor is performing overall and where I may be able to optimize
Posted by Unknown at 4:00 PM No comments:

The pulley I made yesterday was feeling a bit on the heavy side so I decided to add some go fast lightening holes.Now if the belts I ordered would just get here I can finally realize my fear that I made the pulley too big.

Posted by Unknown at 8:06 PM No comments:

I Make Stuff With Tools


The alternator came with a pulley for a single V V-belt. The drive pulleys on the engine as well as the slave pulleys on the water pump are 5V belts. So..... I chucked up a 3" piece of 4140 I had lying around, turned on the lathe, and yelled at it till it made me this beautiful new pulley. As we all know CNC machines make parts for you, all you have to do is ask.

Be Careful Where You Find Your Inspiration

The start of the engine wiring harness, a ridiculously complex affair for a Diesel. See the future!


The inspiration for this project came for my friend Scott. Who in doing something similar, coalesced a number of ideas and long time dreams of mine. To one day run at Bonneville. Through all the troubles he’s had in the three years he’s been building and racing at bonnie he’s made it look easy. Tonight’s epiphany is that I have a talent for dramatically underestimating the complexity of the task in front of me. This by the way goes for parenthood too, but that’s another blog. So there are my two talents. Underestimating, and building work benches. I’m out of cake.

Sand, Gravel and the Darkest BlacK

Diesel is dirty. There I said it. It shouldn’t be but I seem to find with this motor that everything that is dirty is an order of magnitude more so than I’ve seen in dismantling even a dirty petrol engines. Today’s rant is directed at the intake and intake manifold. One of the brilliant ideas for making diesel cars produce less emissions is EGR (exhaust Gas Recirculation [Google it]). This is nothing new as it’s been done in Gasoline cars for long long time. It works for a diesel too for the same reasons, but with the increased particulate emissions of diesel engines and the fact that diesel fuel is a light fuel oil and not a aromatic like gasoline, combine to make a black sandy mess of the intake system. This intake plenum as well as the runners to the intake valves are covered with a sooty, gravely, oily, dark black MESS! (Sort of like the gulf). This doesn’t seem to have affected the engine when it was run in its detuned state on the world’s highways. However it is completely unacceptable for an engine that I need to run at the top of its game. After finding this, it is looking more and more likely that after I get the motor running and the rest of the bike started, this motor is going to have to come apart and get cleaned and freshened up. This may not actually have any effect on the performance of the motor, but there is no way in hell it would be prudent to leave a condition like this. Plus it is imperative that I know exactly what going on in this motor to have any confidence in it. Also I need to provide as pure a baseline as I can for when we begin real tuning for power. I’d love to buy virgin motors from Mercedes but I am just a poor surf of meager means. So as much as I loathe the idea of adding more work to this project by having to rebuild this motor, here we are.

The manifold after I scrubbed for about 30min. It still has plenty of crap in it and I managed to break off the little nipple for the hose MAP (Manifold Absolute Pressure) sensor. Yea me!
One note: