The water pump off the engine block. I'm seriously toying the idea of taking it apart so that I can blast the corrosion off the parts.

I don't know what this is. The 1mm bolt that holds it into the bottom of the engine block was so rusted that it snapped off when I was trying to take this piece out. I think It may be some sort of block heater for winter time. If that's the case then I won;t have to go through the hassle of extracting the broken bolt and and heilicoiling the hole so that i can secure this thin back in the block. Lets hope.

Take everything you know about Gasoline car and motorcycle motors and forget it.Diesels are a completely different animal.the oil sump is not only made from very heavy steel it is also cemented to the lower engine block with polyurethane that is stronger than.... It is there to not only form a tight seal but to also integrate the sump into the engine block for vibration damping and thus quieter running. The sump is on there so well that it is not a user serviceable item. In fact there is no drain plug so the way you change the oil is bu inserting a hose into the dipstick tube and sucking the oil out. the sump is never meant to come off the motor for the life of the car. Yet here I am. Not only do I need to take it off to clean and inspect everything in the lower end of the motor, but I will also be replacing the pan altogether with one I'll make out of aluminum. I need to do this because in the car this engine was designed to run tilted over on almost a 45 deg angle. I'll be running it with the cylinders almost straight up and down in order to make it as narrow as possible.

Used Diesel oil is BLACK. It's still quite thick and I don't think it's all that old,but boy is it Dark. Oh, and for what it's worth when the trucking company or the sender tells you that they are shipping the motor dry, don't believe them. The amount of coolant and oil that came out of this engine was actually surprising.

Posted by Unknown at 6:06 PM No comments:

There is corrosion and rust all over this motor. It cam from Alberta so I assume that not only was it stored outside before I bought it but also it's brief life was spent in the salty sea air of a coastal city.

for a motor that allegedly has only 18K km on it there is a surprising amount of corrosion. Aluminum oxide even inside gasket and seal surfaces. Now it seems I have to take this motor apart if for no other reason than to make sure everything inside is all right and not filled with corrosion and who knows what?

Posted by Unknown at 5:49 PM No comments: 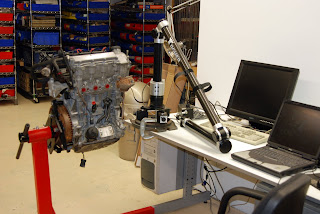 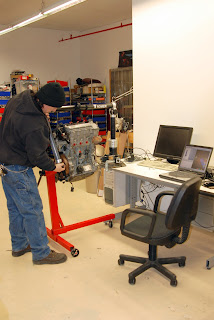 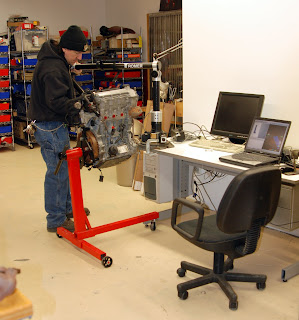 Whats the fist thing you do when you get a smart motor? Why scan it with your Romer arm of course!

This is my new motor. I'm actually very excited because this is something I've been looking forward to for a long time now. It is in a way the continuation of a dream mostly enthused by a very close friend who is no longer with us, and thus never fulfilled in his lifetime. As much as this is for me it is also in memory of him. May the long road begin and May world records fall! 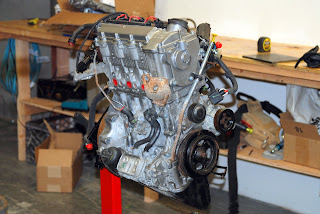 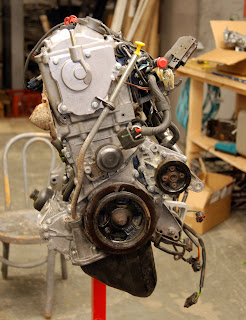 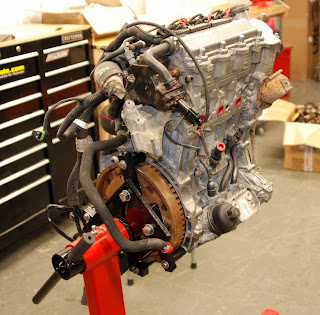 Posted by Unknown at 2:24 PM No comments: