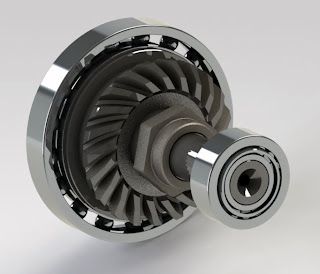 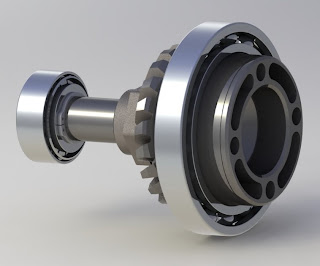 I know I should be modeling frame rails and other bits instead of playing around with rendering but I decided to screw around with photos view 360 little bit tonight. It does produce some very pretty pictures even though I have no idea what I'm doing. In the hands of some one with a rendering clue it can produce some very convincing images. This is the new rear spindle assembly with a Kawasaki gear designed to fit the BMW main bearing with a hub and bolt pattern that fits the BMW rear wheel. It will allow me to keep the same offset for the swing arm and the BMW transmission and still use the BMW rear wheel. What you see here is some renderings of rear bearing assembly as well as a video of the first operation cutting the spindle out of a piece of 4140 steel. The next operation was to move it to the mill where the wheel lug holes were drilled and tapped and some lightening grooves cut in. Next it will be put back in the lathe, flipped around and have the shaft part turned down. That is the spindle that goes into the small Timken bearing and has a threaded section for the nut that captures the main drive gear.
First Op on the rear spindle. From a 3.5" billet of 4140 steel.

The drive gear with pins installed and the retaining
nut I made with a 26x1mm ID thread
Boy how I love and Hate CNC tapping. Having broken a few taps, I am scared poopless every time I push the go button on an unproven tapping cycle. When it works it's a thing of beauty. When it fails, you get to watch your machine mercilessly grind a poor tap into your now ruined work piece while you stand there helpless.  This time however I got it right. 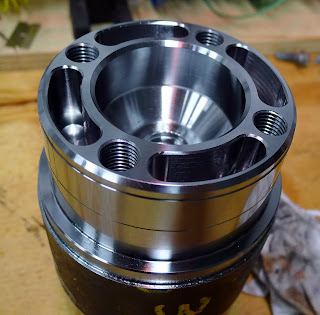 Second op done. Next step is to turn the skinny end. 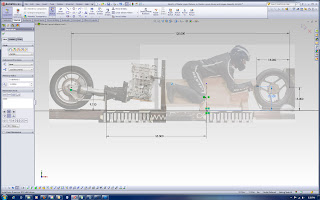 Things are looking more cohesive. I took a small library of pictures to use as references for modeling some parts and for layout of other parts like the rider position and subsequently the frame.  With these images I can roughly determine the engine position and where the front wheel and front swing arm will be which will allow me to play with the preliminary shape of the body work. It will also allow me to start laying out the controls and start planning spaces for all of the components such as the cooling system, fuel tank and air tank that will all need to ne nested within the bodywork.
Taking pictures of the rider (me) on the rider position jig. it was 105 Degrees F in the shop and as humid as a roman bath. I really need to get a remote control for the D80. Yes I have 2 digital cameras. BTW this in HD if you want to really see the detail of me sweating like Al Goldstein.

Posted by Unknown at 6:40 PM No comments: