This Time I think I got It Right (CDI Diesel mockup) 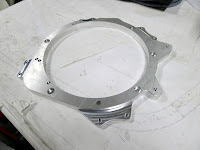 The is the first transmission adapter plate I made from Aluminum. It worked but there were things I wanted to correct and a few features I wanted to add.the 2 major problems with ut was that the holes were not quite right. I modeled them in Solidworks by measuring with a caliper and the were a little off. for the new plate I got the hole locations by scanning the points with the Romer CMM arm and that was far more accurate. the other problem with the old plate was that there weren't enough mounting points for components. there is no sub-frame on this bike and things like body work battery, tanks, accessories have to mount to something. So I added a number of threaded holes that framework or parts can be securely bolted to. This includes that method for the main motor mounts which you will see later. 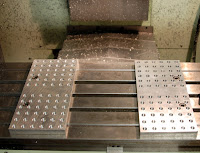 Movable fixture plates with 1/2-13 threaded holes I made from 3/4 mic6 cast aluminum fixture plate to extend clamping holes out to the edges of the bed. Much more versatile.

The Best way to see whether the edge of you part will fit inside the stock you have is to mount a Sharpe in a collet and create a center line tool path to have the machine plot the outline.

The part just fits with the piece of aluminum I have.

There are 44 drilled holes in the part. 39 of them are tapped with either a M8x1.25 or M6x1thread. Thanks to the FSM for ridged tapping in the VMC. all 39 holes drilled and tapped in under 6 minutes. I could have pushed it a little faster but I live in fear of breaking taps. It's a fast way to scrap a part. Sometimes you can recover, but often when the tap snaps it can slightly move the work piece and that throws every subsequent operation out coordinate wise. Even if it doesn't move the part you still have a broken tap in one of your holes and they can be difficult to get out without damaging the aluminum around it. Either way it's ugly.

Here is the first op done. All holes drilled and tapped, the center cut out (and I was able to save the center piece for a later part). Now to flip the part over and do the counter bores, the outside contour and champhers and the reliefs over the M6 holes.

I had made a fixture plate for the first adapter plate I made and it was still good for this one. There are 2 12mm dowel pins on the back of the motor bell housing that locate the transmission and I cut those in the front side of the part so that I could use them to locate the part when I flipped it over. The fixture plate also had 16mm dowels that align it with the center slot of the machine table the center of which we know is located at Y-9.222. once mounted there is a center hole that allows easy indication for the X offset and set the Z once the part is clamped down to the plate and off we go.

Details of the thread, and champher details. 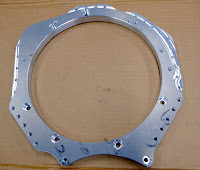 The new plate (right) next to the original

The new plate mounted to the back of the test engine. It fits perfectly and with the extra mounting surfaces will be much better than the original design. 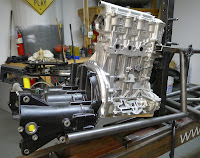 With the Transmission mounted.

Not the final placement, but engine and transmission assembly resting roughly in place for perspective.