More on the Hub Center Inserts 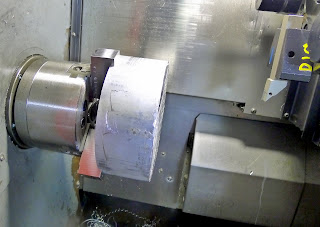 First op done on one of the two pieces. The two halves or pieces are not identical. Since the Kawasaki rim I'm using is not symmetrical about the center these inserts had to be slightly different.

6061 Aluminum is stringy stuff. you have to really push the cutting tool hard to get it to chip properly. the problem I had was that this is a relatively small lathe and a workpiece that diameter has a lot of leverage on the spindle and spindle motor. I was nearly maxing out the horsepower of my machine at the outer diameters. I suppose I could have taken less deep of a cut.

One piec, first op done. Next op is done in the mill.

Drilled and Tapped (6mm X 1.0mm in 12 places) The other pieces just gets drilled and counter-bored. After that the pieces are contoured to shape.

The Finished pieces with the hub assembly and bearing.

Complete Assembly. It's actually a lot lighter than it looks. 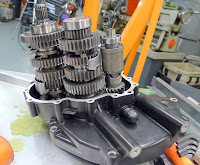 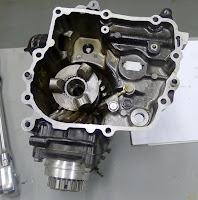 For one thing a bike that big and powerful will have gears that will easily meet my needs. Secondly, Kawasaki have been making a variant of that bike for 20 years so those parts are going to be easy to find, proven, and cheap. I got a set, disassembled the entire drive measured and made 3D solid computer models. This allowed me to fairly easily design a completely new final drive that will still use the BMW transmission, swing arm and rear wheel and give me the ration I need to reach the speeds I think I can reach with this project. I ran into a little problem with the rear axle or what I call the rear spindle. First it has to mate properly to the BMW rear wheel. So that mount is a given. Next, because where the spindle meets the wheel is relatively large, BMW uses a Big bearing (85mm ID 125mm OD) for support. The Kawasaki Drive gear that I planned to use was made to press onto a splined shaft that had a major diameter of only 27mm. I initially designed a new spindle that had this 85mm bearing surface and then reduce to have a 27mm spline behind it. The problem here was there was no way to cut the spline. After thoughts of shaping it by using a cutter locked onto the oriented spindle of the CNC mill and running it back and forth till the spline was effectively cut, Chris though that a better way would be to pin the gear to the spindle with dowel pins and just capture it with a thread and nut. A thread would be easy to cut on the spindle and so that’s the direction I went. I have never done any hard turning or hard machining and know that gears are usually case hardened for wear resistance. I was a bit worried about machining this gear so that it would work in this new design. I even went so far as to pay a visit to a local gear cutting house to ask the owner for advice. As it turns out it’s wasn’t very difficult at all. Even though according to Steve at Apex Gear the gears I had in my hand were case hardened to ~62Rc, it was most likely only case hardened to .02” deep and most good carbide tools should go right through the case. I ordered a letter C solid carbide drill and .2395 carbide reamer and took the above pictures as I drilled the holes in the Bridgeport using the DRO to locate the holes on a circle on a flat on the rear of the gear. Those are .25” dowels and now that they are pressed in I can finish making the spindle and the other components of the new rear drive. I’ll try to post some pictures of the 3D models so you can see what I’m going for.
Posted by Unknown at 7:52 PM No comments: