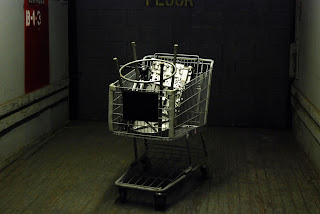 Autodesk, the makers of AutoCAD (among other apps) is offering a free Beta test of their new photo to 3D model service called Photofly http://labs.autodesk.com/technologies/photofly The idea simply is that you take a number of pictures of something for 3620 degreed around it, upload it to their photofly cloud service and within minutes you get a 3d Mesh model of whatever it was you took pictures of. I've been trying it out and it does work though there seem to be a lot of variables to account for in order to achieve success though it really isn't that difficult. I have gotten pretty good results so far with the only real disappointment being the attempts at getting a 3D model of my 4 year old Otto. To his credit he actually held very still (for a 4 year old) and his body came out pretty good on the 2 times I have tried to do this so far. His face and head didn’t fair so well due to his fascination with what I was doing and his inability to keep a straight face. I'd probably have better success with him if I wasn't making goofy noises and talking to him while I tried to photograph him but I digress. I still think I can get a good model so I'll try again now that I have my good camera with me. Speaking of good cameras, the image quality doesn’t seem to be as important as you'd think as long as your subject is in focus. That said, having a good camera, like my Nikon SLR, which can take 40+ images with a single push of the shutter button really helps. This is because all you have to do is frame your shot, then keep your aim as you walk around the subject as the camera records the images. What does all this have to do with a diesel motor land speed record bike you ask? Well I have always wanted a 3D model of the smart motor. I’m not about to pay a scanning service to do one and my Solidworks skills aren’t good enough to do it free form as it were. On top of that it isn’t really nessicarry to the project. I just want it to add authenticity to the 3D model and to the assembly model of the bike I build as I design parts for the project. So here I am taking the bare Smart engine Block I have out to the back parking lot via the freight elevator so that I can get some good pictures if it. The lighting in the shop isn’t great to take pictures by especially taking bursts of images where you need a fast shutter speed to keep the image from blurring as you move around the subject. For a really good overview/tutorial, my friend Adam has done this video:
http://cadjunkie.com/2985/tutorials_autodesk-photofly-preview-sphinx/
Check it out.