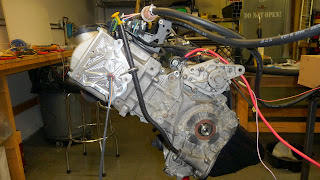 The OEM alternator for a smart CDI Diesel is actually 10 amps bigger than the one in the Gas version of the Fortwo. The Gasoline alternator is 80amps I believe. This would make since considering that the high-pressure common rail injection system needs much more power than that of the relatively low pressure gasoline injection system. Having said that, I calculate that I don’t need more than 20amps to run my system as I don’t think I’m going to be running this bike with a BOSE 100watt 6 disk surround sound system nor the 55watt headlights and all the other powered gadgets that one finds on a car. Though power windows might be nice in the desert so that I can roll down the window when it gets hot, but I digress. Sizing an alternator as small as possible is also an obvious goal for not only weight savings but also in drag on the engine from the load of the alternator generating current. Originally (as some of you may be thinking) I was planning on running a total loss system from a battery and just eliminate the alternator all together. However the ECUs and injector control is very sensitive to low voltage conditions and will begin to fault or just cease to function if the system voltage drops below 13.2 volts. So this necessitates an alternator. Denso to the rescue. This little alternator I believe is from a Kabota forklift (as well as a number of other industrial applications), is rated at 40amps, is internally rectified and regulated, and you can see by the dimensions is small. I also got lucky in that there was a hole already on the water pump casting that once enlarged and tapped for an M10 bolt has this alternator aligned almost perfectly and in a position that didn’t make the frontal area of the motor any larger in a way that mattered here. 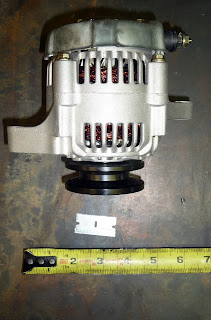 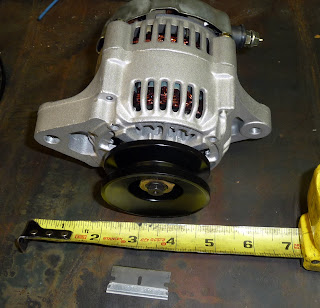 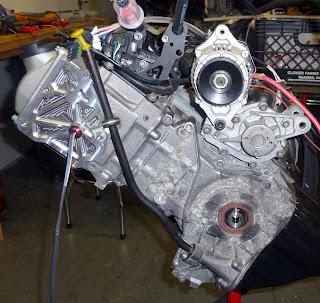 Here it is mounted to the water pump. Next task is to make a tensioning arm and size a belt. I will have to turn a new pulley to match the belt type of the water pump and drive pulleys. Next.